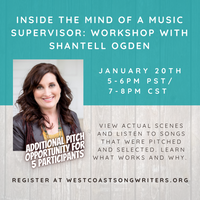 Inside the Mind of a Music Supervisor

Inside the Mind of a Music Supervisor

$20 Purchase your spot below

Have you ever wondered what actually makes a song ‘work’ for a scene? How does a Music Supervisor know what songs to pitch for placement?

Join our workshop hosted by Shantell Ogden, owner of SOSync and Music Supervisor as she shares actual scenes and the songs that were pitched and placed to learn how decisions get made for music. We will also cover a few sync basics and guidelines for pitching. In addition, 5 workshop attendees will be selected at random to pitch a song for an upcoming film project Shantell is working on.

SOSync is a music licensing company based in Nashville. Since 2011, we have worked exclusively with independent songwriters/artists to deliver pre-cleared, ready-to-place songs as a music provider and Music Supervisor. Click here to visit our site (make link to https://so-sync.com).

SOsync was founded by Shantell Ogden, an award-winning artist and songwriter. Nashville-based Shantell Ogden has a gift for crafting songs with real conviction and emotion. Her songs have received airplay on hundreds of country and Americana radio stations internationally, and gained impressive chart positions both in the US and Europe, including a #2 slot behind Chris Stapleton for her single "Blossom in the Dust." Shantell's music has also been featured in shows such as the hit television series Hart of Dixie and in more than a dozen feature films. Born in Utah, Ogden brings the work ethic she learned growing up on her family farm to her life as an independent performing artist. Having toured nationally and in the UK and Ireland, her music has been praised by notable media including Performer Magazine, No Depression, and Maverick Magazine (UK). Since the release of her seventh album in 2021, Shantell has enjoyed extensive media appearances including Coffee, Country & Cody on Nashville’s WSM - the home of the Grand Ole Opry -Today in Nashville (WSMV) and Good Day Utah (Fox). In addition, she has appeared at high profile festivals including Americana Fest, CMA Fest, and Tin Pan South. Praised for her work with awards including Songwriter of the Year in the 2018 International Music and Entertainment Association (IMEA) Awards, Shantell Ogden is truly an artist on the rise.